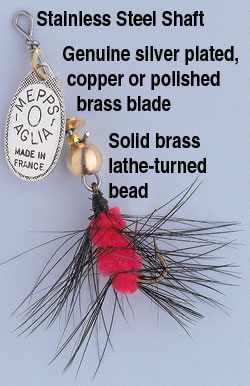 Perfect wherever single hooks are needed!

Virtually snagless, these lightweight single-hook Mepps are ideal for both the trout and panfish enthusiast. Just a bit heavier than Mepps Ultra Lites. Both spinner fishermen and fly fishermen will enjoy the touch of added weight.

All Spin Flies are either dressed with natural hackle or a classic wooly worm. Like the Mepps Ultra Lites, the Aglia Spin Flies are ideal for taking bedding panfish or stream trout, anytime of the day, all season long.

Use silver on bright days. Polished brass (gold) blades produce best when it's overcast. Try copper in streams after a heavy rain, or in dark, stained water. 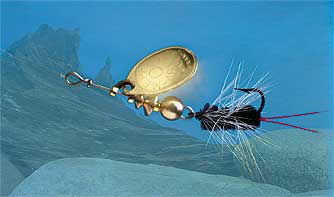 The Mepps Aglia blade is the original French style spinner blade. The Mepps Spin Fly features a #0 Aglia blade which is just one size up from our Ultra Lite blade. This blade flares outward from the spinner's body as it is retrieved. The blade angle produces a steady, high-pitched flapping sound with a light buzz. The buzz gives this blade its own unique sound.

I was out on a day where the fishing report was bleak and I wasn't getting a bite or seeing a single fish rise. I crossed paths with a kind stranger who asked, "What are you using?" I showed him my fancy new "Trout Magnet crank bait" that was "guaranteed to reel em' in". He took a single hook Mepp's spin fly out of his stash and said, "Here, keep it. It's the only lure you will ever need." I walked downstream as the stranger left and caught a decent 10" brown trout on my second cast. A few minutes later I caught a fiesty little rainbow. Neither fish was huge, but the stranger saved me from getting skunked on a day where the fish were hiding out. I just ordered half a dozen more in a few patterns. Can't wait to get back out there!

I love the Mepps SPINFLY in the wollyworm pattern because where I come from you either match the forage the fish are eating or you're going home empty handed. So, the wollyworm pattern in the green or brown work fantastic in the streams and rivers around my house. There is also the occasional steelhead in the streams and when they catch a glimpse of the SPINFLY, they'll hit it in an heartbeat. I also love the fact that I can use the #00 SPINFLY on my Redington fly rod, but, I prefer the #0 SPINFLY on my ultralight rod and reel. Overall, I LOVE the Mepps SPINFLY in the wollyworm pattern.

While on vacation in N Georgia, I took time to fish with my Ultra Lite on the Soque River. I wanted to just relax and possibly net a few rainbows. To my suprise, I caught a number of really big rainbow trout, one was a 10.7 lb monster! All of the fish were caught on my favorite little Wooly Worm Spin Fly by Mepps. I made a YouTube video of the catch and release and give Mepps credit! Look up "Big Rainbow Trout on the Soque River" by Brent Alexander 1 and check it out! Thank you for making the best lure in the world!

The Mepps Spin Fly is a great trout spinner. I caught the biggest fish probably ever in our little creek on these spinners.

This is an amazing lure! I can use any other types of spinners and catch 1 out of 10 - 15 casts. With the Spin Fly, it's almost every other cast!I have been using this lure for about 6 years now and will continue on for MANY MORE!

This lure is amazing. I like the gold and yellow in cloudy weather and the silver and white in Sunny weather. I caught so many trout on this that they just got beat up. With the quality of Mepps it takes a lot to beat up one of their lures it would be nice if they were in size 1 and smaller. Thanks Mepps best lures out there.

I love this little lure! I am convinced it will catch just about anything with fins. I remember one day in particular, my brothers and I were fishing a private lake. I was throwing a red wooly worm, and it seemed like I was catching something every other cast. My brothers, who were not doing as well, asked what I was using and if I had any more that they could use. I will be stocking up pretty soon for this upcoming season.

Great lures. They never let you down. Great when used on an ultra-lite spinning rig. At times I only use these when I go fishing. I only wish they were more readily available through local stores.

That morning the fish were very selective in fact they were not eating at all!! I threw in a Mepps Aglia Spin Fly I bought in France last summer and started a slow retreat. After just 3 seconds wham the first fish of many was hooked straight away. My Mepps Aglia saved the day.