Trout Caught by Lonnie with Mepps in Vermont 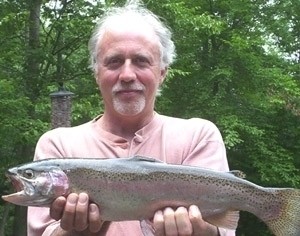 After returning from a weekend trip to the Adirondacks , my wife and I had a couple of hours to kill before an auction preview in Manchester which she HAD to attend. Now being the good redneck that I am, I always have my fishing pole with me, so I suggested that we go down to the Battenkill River by Manchester and she could watch me fish. It was a real hot day so Cathy figured that a little time in the outdoors wouldn't actually hurt her and maybe she could actually see me catch a fish. Now, keep in mind that the Battenkill is a very hard river to fish and only the best fishermen attempt to catch anything from its waters. I decided to use one of the Mepps lures that my son bought me and after about fifty casts, I was beginning to get frustrated, and, looking up at the sky, I noticed a large thunderhead of clouds approaching, which meant that we would probably get wet, because we walked some distance to get to this place on the river.
Just as the rain began, I casted slightly downstream to maximize the pull on the lure, and was retrieving it slowly when out from under a log I saw a HUGE white streak ATTACK my lure. The force of the hit was awesome as this beautiful fish did everything it could to shake free the hook in its mouth. It took a wild turn downstream which meant that in order to keep from snapping the line, I would have to follow it! In the water I went and was basically swimming with this trout as the rain began to fall. I was determined, and there was no way this fish was going to get away, so I followed it down a stretch of rapids, and finally into a deep pool where it went straight to the bottom, but by this time, it was pretty tired so I was able to reel it in. Cathy couldn't believe what she was seeing, and even though we were both soaking wet from the river and the rain, we were happy knowing that dinner was hanging from my fishing pole.