Bass Caught by Jonathan with Mepps Syclops in South Carolina 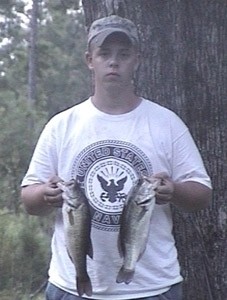 I cast into a little cove in my grandparents pond when I hooked one of these bass. He but up a good three minute fight, he had my rod folded over double. When I got him in, I was amazed because this was my biggest bass.

The other bass in this picture was caught because of a messed up cast. The wind shifted my lure and made it hit about two foot off shore. As I was realing him in, I started to shake because he was fighting with all his might.