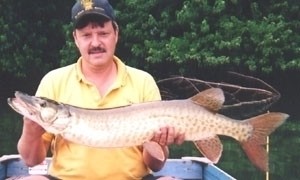 This fish was the first catch of the day. I thought I snagged a tree branch as this fish came right to the boat without a fight. As soon as the fish saw the boat he started to run and put up quite a fight. Ten minutes later he was in the boat. After reviving him and releasing him the very next cast produced another musky although slightly smaller.