Musky Caught by Kim with Mepps in Utah 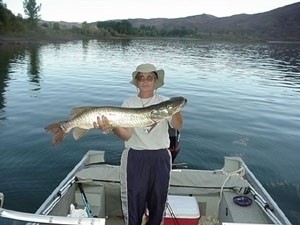 Making one last pass before heading to the dock for a day at about 6pm. We were trolling at the north inlet of the reservoir in about 15 feet of water I noticed my drag starting to go out. Thought it was a snag but in 15 feet of water quickly ruled that out. Got the boat turned around and headed back up the shore line following the line. Started bringing in the line. Got to where the fish was it came to the surface and that was it a battle of about 15 minutes until we finally landed this one. For this reservoir this is a big fish but not a keeper--size limit is 40 inches. So took the picture and released it back into the water to fight another day.