Pike Caught by Quenten with Mepps in Nebraska 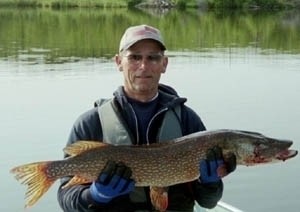 My Uncle Garry Esser had been going to Elbow Lake in Northern Manitoba for a few years and invited me along last summer. It was fishing at its best. There were 7 in our party and we all caught 30" to 38" Northern all week, I did get the biggest using the Mepps #4. Will be going back next year, a great experience.