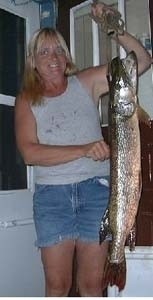 Casting off the rocks along the railroad tracks half an hour before sunset hoping to catch something bigger than the small crappie that are numerous in the lake. My girlfriend Sharie is struggling to hold up this crappie predator that measured over 37 inches.