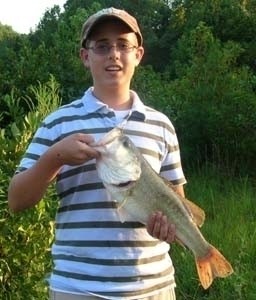 My brother Alex, my friend, Andy, and I were fishing at a pond in a neighborhood behind our neighborhood. I had caught one buck bass around 6:00 pm, and it was starting to cool off around 7:30 when the fish hit the spinner. At first it started running towards the bank, and i didn't know it was as big as it was. Then it decided it was heading the wrong way and it ran off deep, and the drag was squealing like crazy. Only one thing was going through my mind- KEEP THE ROD DOWN!!! After a few more minutes, I managed to get him up close and he lept out of the water and shook his head as hard as he could. We didn't have a net, and I wasn't going to risk flipping the sow like other smaller bass, crappie, and pickerel we catch out of there, so my brother waded in and lipped the fish. It was probably the first time I've gotten the shakes from fishing!

Caught at: a neighborhood pond