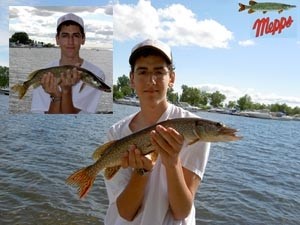 Size: One is just over 5lbs, other is smaller

Caught the bigger one first on a Mepps Aglia 5 I found on the ground. After the first one was in, my rod got crushed, and broke. Caught the smaller one on a broken rod. A little fish like that fights better on half of a rod!