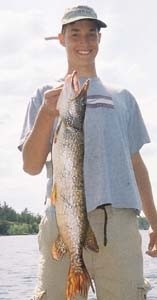 It was a bit early in the afternoon and the wind was kicking up a bit so we headed for a favorite place in Musky Bay..Generally this is Q's spot but not today..a couple casts and Spencer gets a nice hit..works the drag a bit and a few minute later brings in this nice northern..As always, the only bait Spencer will consider is the Dressed #5 Aglia in Hot Firetiger with a Yellow Tail..No other bait works the wonders of MEPPS!