Catfish Caught by David with Mepps in Wisconsin 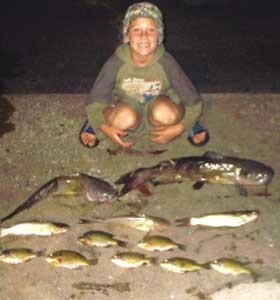 Went out hoping to get some white bass and walleye. Had no action on them whatsoever, but noticed a lot of bluegills. Switched over to a well used Thunder Bug and caught plenty of nice 14 Oz-1Lb1Oz Gills. Then we had a strange phenomenon. Most folks don't see catfish as an apex predator, but what we saw was amazing. A large amount of catfish started working together to get the smaller fish into a ball, then a half dozen at a time they would come up from the bottom through the smaller fish grabbing a mouthful before jumping halfway out of the water. After getting over the initial shock of what was going on we put on some SpinFlex spinners with minnows and slowly jerked them through the gathering of catfish. Over the next hour the fishing was great. Almost forgot how hard a cat can fight. We will be spending a lot more time in that spot to try and get some more of the brutes. Hopefully one large enough for an award. Hope to see you out there...:)