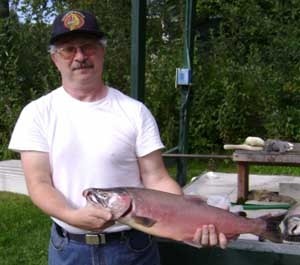 On this particular day we were fishing along a tributary which flows into the Talkeetna River (the East Fork). There were about a dozen of us spread out and it looked like everyone caught there first fish of the day; everyone but me. Another fisherman on my left had caught what appeared to be about a 10-12lb Coho; and he decided that he was going to use his fly-rod. I peeked out to see what lure he would try next (what fisherman wouldn't), he made a basket which held 3 salmon eggs.
I went to my tackle and switched my lure to the #5 Aglia Single Hook Hot Orange. I casted out and on the retrieve caught my very first Coho Salmon.

This story doesn't here; after I took my 8lb Coho off the hook, I casted out; again using the same lure and I caught a 7lb Coho. Both of these fish were caught before the fisherman that was using his fly-rod caught his (on the fly-rod).