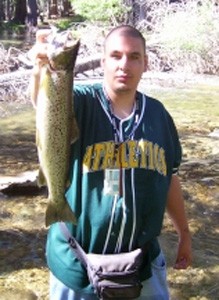 With all the fishing pressure on the Fourth of July weekend going on in the Eastern Sierras, the trout were real spooky and nervous. Everytime I would sneak up on a hole and make a cast, the fish would scatter and dart downstream or upstream hiding near cover with each cast becoming more wary of what I was doing. I noticed there was some rather large fish hiding under a huge log laying across the creek. I had a feeling some of them were a brown, but, as soon as I made a cast, within a foot of one of the bigger boys in that hole with my Mepps spinner, I instantly hooked up with a chunky 3 lb brownie. It took off downstream and even had me tangled up in some large boulders when I walked downstream to get it out of the snag up, somehow it got out of it on its own and darted straight into my net. Thank goodness for Mepps, any other lure, that fish would of been gone.