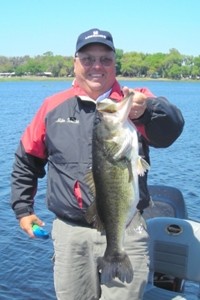 I was fishing with friends on Lake Henderson in north west Florida on March 25, 2008. A cold front had come thru and it was windy and cold ( for FL). I was casting the timber doodle over lilly pads and the bass hit. The water was clear and I could see her. After landing the fish we weighted it with 2 scales which both read the same 11 lbs 14 oz. , took photos and released the fish alive to cought another day. It was the only fish caught that day.