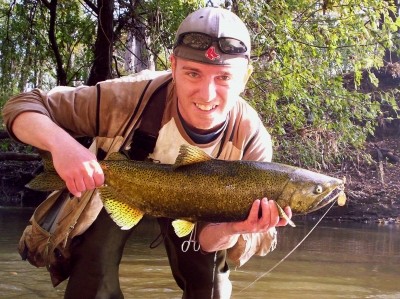 This fish was probally the most fun catch of the year so far! I was fishing the Redds today. There were 4 kings all fighting each other. Most of the kings have been done now for about 2 weeks now around here. But I know a few places where you can still catch a few after it's over. So I got to the spot and was standing right next to them up close. There were 3 males and one hen in this spot. The bigger male was biting at a smaller beat-up of males tail. It's funny because the big male would bite him and not let go for 30 seconds.

Anyway the fish I caught was next to those 2 males fighting. He was the fresher fish out of the bunch. He would fight the other 2 but mostly stayed out of it. So I had my white flying bunny leach fly on today. I took a drift in front of this fish. Wham he nails the fly all the way inside his mouth. Set the hook and the fly came out. Took anoth drift in front of him. Same thing happens again. Took a 3rd drift and again the same thing. By this time I was very mad. Can't figure out how I'm missing this fish when the whole fly is in his mouth.

So I put on a #3 Copper Mepps spinner. Of course this same fish comes up to my spinner but this time only nips at it. Took another cast and the same thing again just a nip. Finally I held the spinner in front of him in the current and he finally got fed up enough to hit it good like he did with my fly before. Set the hook got him in and the rest was history. I let him go hoping he would stay on the redds because aggressive fish like this one most likely would bite again. But he went to the hole to rest. I might check on him tomorrow to see if he is still there. If he is I bet he would bite again. lol

As for the spinner I tried another new combo today. I put on a fluorescent red decal on the back of the blade. I hooked a fish the other day on this combo but lost the fish. So this fish was the first landed on this new combo. Try putting fluorescent red decals on copper mepps blades. They work well!