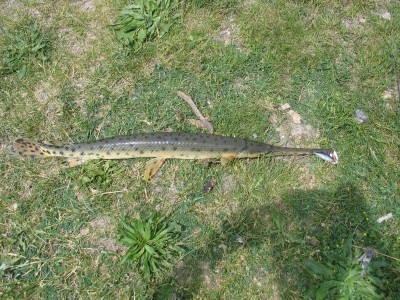 Pretty crazy story behind this one. I blew a tire riding 6 miles to Metro Beach again in 90F+ heat with strong winds coming at me. Got to the North Marina and first cast imemdiately nailed this guy on the Comet Mino. He would be my only fish for the day, and going home with a partial flat tire 6 miles in strong winds and blazing heat was terrifying. I nearly ended up in the hospital from getting sick from heat exhaustion upon arriving back home. On top of that I almost got hit by another car at a major intersection where I was hit 2 months prior by some driver. I wasn't about to complain "too" much though. I landed a nice spotted gar. :) Thanks Mepps for making the Comet Mino. It is still one of my most reliable "catch fish no matter what" lures I use.