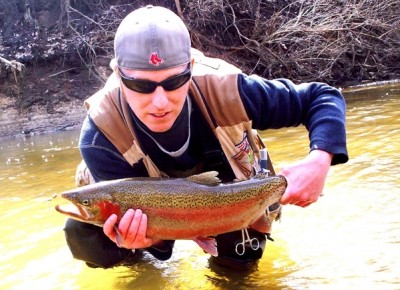 Wow this really was a great Mepps day for me! Been doing really great with Mepps spinners while fishing for Steelhead on the Redd today. These fish would hit as soon as the spinner hit the water. I ended up going 9 for 10 today. I also had alot of fish follow the spinner in and strike at it. I usually will use flies most of the time. But today they wanted a spinner instead of a fly. I'm always glad to have a bunch of Mepps on me when the fish want them. This fish hit the spinner just after getting run off by the other males on the Redd. As soon as the fish got near where I was standing. I put the spinner in next to the fish. He follows for a second and then hit the spinner! Good way to start off the day!