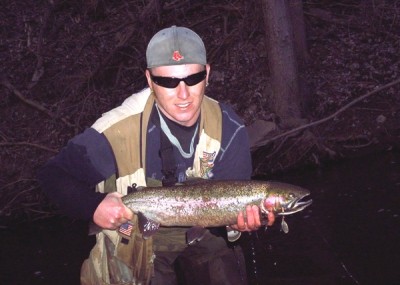 Fish 8 of 9 landed today! This was an interesting catch. I found this redd with some Steelhead sitting in it. But I could not move up close to them at all because of this tree in the water that was blocking my way. So I had to cast upstream and hope for the best that a fish would be able to pick up the spinner in the short about of time it had to hit the spinner. So I took a few casts. Everytime the spinner would get close to the fish, the fish would try to hit the spinner. The fish kept missing due to the short time the spinner was in it's redd. Finally after missing this fish 3 times. I got the perfect cast and the fish slammed my spinner. Hard one to catch but it was worth it!