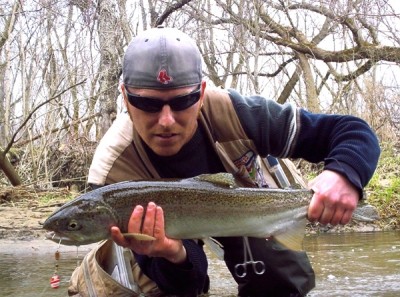 This was my favorite fish slam of the day! I was walking downstream getting ready to leave. When I found a Steelhead sitting by herself right under a small branch. Where I was standing, I had no way to be able to get my spinner to spin because the branch was in my way. So the only thing I could do was jig the spinner on the other side of the branch. So I did this and wow she tried to hit the spinner. I did not think she would hit it that way. So of course I miss her. But she stayed there. So I did this again and slam a hit. 3rd time I do this, she hits it hard. She had the whole spinner in her mouth. I set the hook hard. Then somehow the hook popped out and it got stuck on the branch. So I decided to try and pull the branch in so I could get the spinner out of it. By then I figured that would spook her away. But it did not at all. So now the branch was not in my way anymore. I knew that I could get the correct presentation to the fish. I take a cast and she comes up and nails the spinner. Set the hook the rest is history! I got her by holding the spinner in the current right in front of her. Great Mepps fishing day. Will be back out again tomorrow!