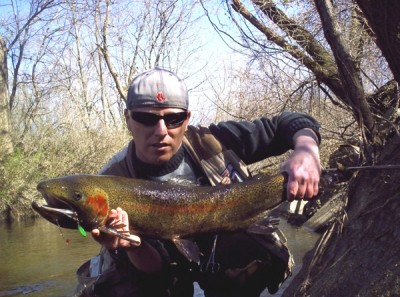 Slow day on the redds today. Still good numbers of fish around. They were all spooked today. Before I could get my spinner in the water, they would take off. I got lucky and found 3 fish spawning. There were a bunch of suckers around trying to eat the Steelhead's eggs. The fish I caught was biting at these suckers when they would get too close. He even had one in his mouth for a little while. Anyway I tried to stay back and swing the spinner in front of them. But they would not strike. So I decided to try and move in closer to them. I got close and they did not spook. So now that I was close I was able to get my spinner closer to the fish. I take a cast and hold the spinner in the current right next to them. The fish hits the spinner but it came out before I could set the hook. So I kept the spinner in and he turns to the side, hits it again and swallows the spinner. I set the hook, bring him in. He was a beat up looking fish. Sadly I hooked him on the lower jaw near the gills inside his mouth. He was bleeding. I tried to release him like I always do with all Steelhead. But sadly he died after I tried to revive him for 15 mins. But from the way this guy looks, he probally would of died after he was done spawning anyway. If I would of known he was gonna die I would of never even took a cast at him. Oh well still was cool to see a beat up old Steelhead hit my Mepps.