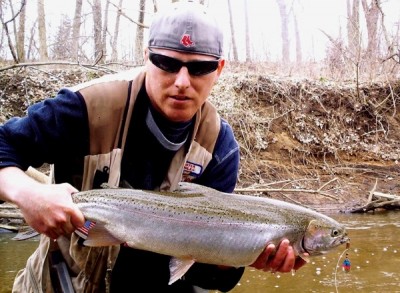 This is the 2nd fish of the day! I found this spot with a ton of Steelhead spawning on the redds. I was hiding behind a tree so the fish would not see me. I found this redd 10 foot away downstream with a huge 15 pound male Steelhead sitting there fighting off the other males. So I took a cast at him. But instead a smaller 3lb. male tried to hit. But he missed. So I took another cast. Finally the big buck took my spinner. I remember seeing the white of his mouth when he hit. But sadly I missed the perfect chance to set the hook. I set the hook too early due to being too excited. So after that I kept trying and then the female comes up and slams my spinner. She put up a good fight for a spawning fish. She jumped and almost took me into some trees. Fun catch!