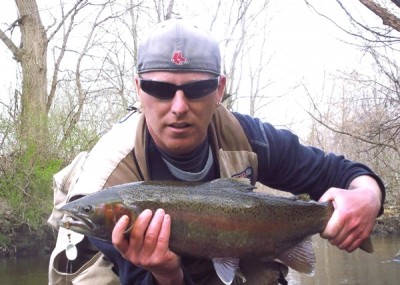 Last fish of the day. I was at a little redd that usually holds alot of fish. But when I got there. I did not see any fish at all. So I looked around real good to make sure. But still nothing. So I was ready to pack up and go when I heard a splash 15 foot downstream. Sounded like a fish coming up the rapids. So I waited and then 2 males were swimming up toward me. So I took a cast at them. As soon as the spinner hit the water they both spooked. But then they both decided to stop and rest right in front of me. So I just dropped the spinner down next to the fish and tried to swing the spinner. But the fish did not want that. So I let out some line held my rod way far out and dropped the spinner in the water holding the spinner in the current a foot in front of him. Then he freaks out and nails the spinner. He hit it so hard! Was an awesome strike to see! I really did not think this fish would hit. But he did. He just wanted a perfect presentation. That's been the key this spring. Sure I get them on the swing, casting across, and casting upstream. But the best way that never fails has been holding the spinner in the current right in front of them. It gives the fish enough time to strike and it stays there in front of them and they get mad and hit! Another fun Mepps catch!