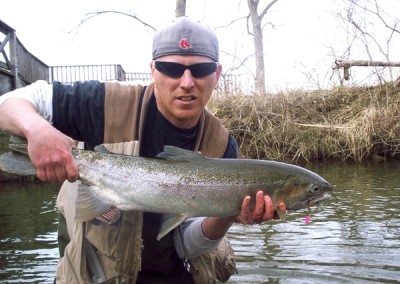 Was fishing the redds again today. Went to a spot on this little creek. Had 2 males try to hit. But they never got the whole spinner in their mouth. After that things shut off. So I moved to another spot upstream looking for Steelhead. I did not see much. Then I saw one moving upstream. So I waited for him to swim by me. When I did I swung the spinner in front of him. But again he tried to hit but did not really get it in his mouth. So I get mad because all these males are not hitting hard. So I was getting ready to leave after walking miles to find fish, when I saw 2 fish sitting near this little bridge. So I cast upstream and the male comes down follows the spinner but does not hit. So I move into a better positon right across from them. I take a cast at the female. She tries to hit the spinner. She misses. 2nd cast she turns to the side and nails my Mepps. She took me udder a log and tied to wrap me up. But I pulled her out. After that she jumped a few times. She fought good and was also pretty fresh. Got her in. Finally landed one today. I dunno what's been going on with the males lately. They try to hit but are getting to the point where they are not aggessive like they were before. I hope they hit hard again because I'd rather catch a colored up male than a female. Still was a fun day! Tomorrow should be great when I return to my favorite spot I fish during the weekdays! Had to take a break from that spot for the weekend.