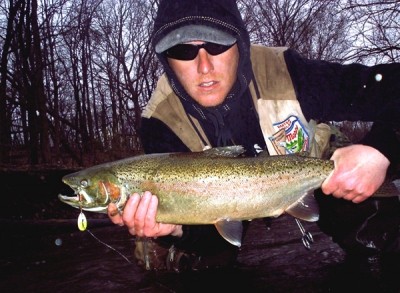 2nd fish of the day! This fish hit in a spot where I've not had much luck this spring. The spot always holds fish but they never would bite. Well today they were trying to bite. I was casting into this redd with 4 fish sitting. 2 of the males kept trying to hit but they would miss. After that 2 of the fish moved up into a redd closer to me because they got a little spooked from me trying to cast at them. Well when they did that I had the advantage. So I held the spinner in front of them. But no bites at all. Then the other 2 moved up closer to me. I kept trying but no hits. So 2 of the males moved back down to the first redd they were on. So I casted at the 2 fish on the first redd. Well they tried to hit but missed. So I finally took another cast in the first redd and got one mad enough to slam my Mepps. Crazy how this fish would not strike in the redd closer to me but did in the first redd. lol Good times!