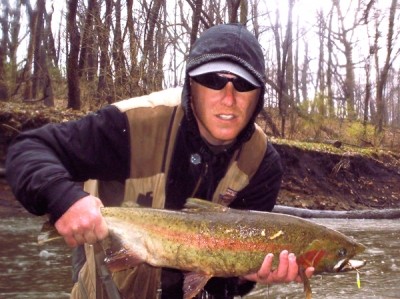 5th fish of the day! Was walking back upstream to the 2nd spot where I landed a fish earlier. The spot where I did not have much luck before until today. This time there were the same 4 fish around. Even the one I caught earlier. 3 of them were on the back redd. But right in front of me was this nice male sitting by himself. I took a cast thinking he won't bite. But he came up and slammed my Mepps! He swallowed the spinner! I landed him tried to let him go. But this fish did not make it. The hook was in his gills since he swallowed the spinner. Mostly likely he would of died after spawning because he was pretty beat up looking anyway. The other 2 fish I landed I did not get photos of. But I will say today was a fun day! 7 for 8 with the same color spinner. The #3 Glo Chartreuse Aglia was the spinner to use today! Fish could not stand seeing that spinner near them!