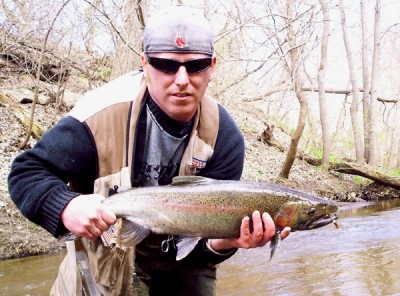 I got this fish holding the spinner in the current in a redd. The fish hit the first time, but I missed him. 2nd time I got a good hookset. This fish was very mad when I was trying to take his photo. He kept of moving. Also he did not like it when I was taking the hook out of him. He had some mean looking jaws. lol Well he finally let me take the hook out and he took off happy that he was not hooked anymore. Fun day. 3 for 7. Lost alot more than I landed. I did see the fish I lost yesterday. He had my #2 silver and pink spinner in his mouth. He actually tried to chase my spinner 3 times. But I don't think he can open his mouth since the hooks looked like they were hooked into the top and bottom jaw. I hope the hook comes out so he can bite again. lol Looks like the run will last a while longer!