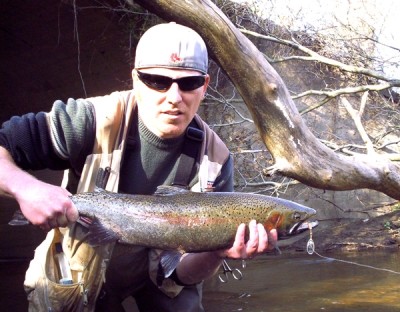 Fish 4 of 5 today. This was the slam and the catch of the day. I found a redd with a ton of fish on it. I took a cast at this buck. He nailed the spinner on the swing. As soon as I set the hook he jumped straight out of the water 10 times or more. He almost hit his head on that log behind me in this photo. Plus he almost jumped on me when I got him close to me. That's all the fish did was jump. Then, I landed him. He sure put on a great show today! I wish I would of had my video cam with me. Was a awesome Mepps catch!