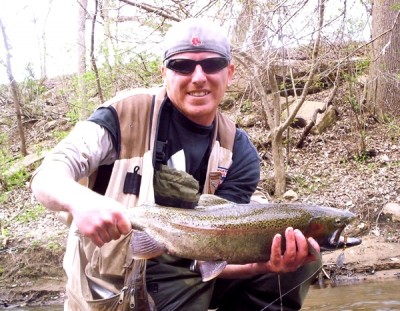 Fish 5 of 6 today. Shortly after I caught the last fish. My green decal came off. So I had to just go with good old plain silver. So I went with that and got this fish to hit. I got this fish holding the spinner in the current in fast water on a redd. Water was so fast that it was hard to keep the spinner down. My spinner was toward the surface. This fish came up once to try to hit but he missed. 2nd time he slammed my Mepps! This fish was being a pain when I was trying to take a photo of him. He kept moving and trying get away. But after a few tries I got this photo of him. I had a hard time trying to take the hook out. I had him hooked good. He would of never got away. Another fun Mepps catch!