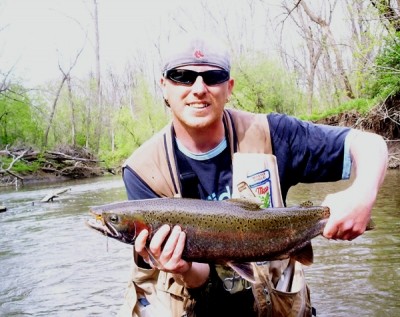 Was out today on the redds. Still finding some fish around. Found a spot with fast water where 10 fish were spawning. Was trying for the males in front of the female. They would not bite. So I casted behind the female and this buck came up and nailed my spinner. Got the fish holding the spinner in the current in front of the fish I saw. I also lost a nice female today in the same spot. She nailed the spinner and took off. She came back down near me. Then she shot up at me and ran right into my foot. lol After that she took me into a branch then the hook came out. She was a pretty fish. I wish I would of landed her but it was funny seeing her run into my leg like that. lol I'm surprized I did not get hurt. lol Might as well go again tomorrow since I'm unemployed with nothing else to do but fish. lol I should enjoy the fishing while there is still some fish around.