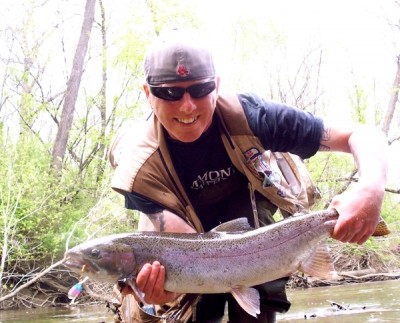 I left my favorite spot and headed down low closer to the lake. Found 10 to 15 steelhead spawning. I fished this little hole in front of the redds first before I went after the fish I could see on the redds because there is always a few fish that hold in there. Took a few casts at the front of the hole, then the middle. I took a cast at the back of the hole close to the redds. Right as I was about to pull the spinner out of the water, this nice hen came all the way up from the redds and slammed my Mepps. I saw the whole thing right in front of me. Was a great site to see. She put up a nice little fight. I'm not for sure but I think this was the fish I lost yesterday that ran into my foot. She looks the same. She was the slam of the day. I also lost one and had 3 other nice strikes today. I hope to catch a few more in the next few days. Good times!