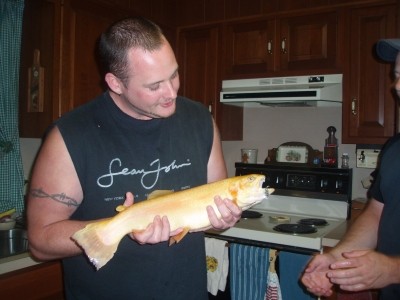 Upon fishing the Auittapahilla Creek the morning on July 4th 2009, my friend and I came across a large Palomino. Agreed to return to the location later in the evening with worms in attempts to land this monsterous fish. After returning later that evening with two boxes of worms we were unsuccessful for the next two hours trying to catch this fish. Then as the sun started to sink into the tree line my friend started to walk upstream to another hole in attempt to make this night somewhat worth wild. I instead removed my hook and tied on my faithful Mepps lure. After running the lures in front of this beautiful fish he struck. As I screamed for my buddy to come net this fish my reel just kept spinning. Finally the line slowed and the fight was on. As my friend neared the beast, the fish emerged from the water with a bright orange glow. I am standing there reeling, hoping my line holds up. Finally he nets the monster and the celebration begins. As we start walking out of the stream toward the bank the palomino still has some fight left and flops himself right out of the net and snaps my line. While in shock, I took my ugly stick and threw it like a javelin in a competition. In hopes that the fish was in shock or maybe soon to be dead, we walked up and down the stream for about 15 minutes in search of this resiliant creature. With no luck and the sky turning black we started to walk back to our gear. As we were getting ready to come out of the creek my friend looked down and spotting this orange out of the corner of his eye. He shouted for me and as was we walked closer we could see a fish starting to float on its side. This time to be careful, in case the palomino wasn't dead; we used two nets and scouped him up. Finally the evening could end.