Steelhead Caught by Ted with Mepps in Indiana 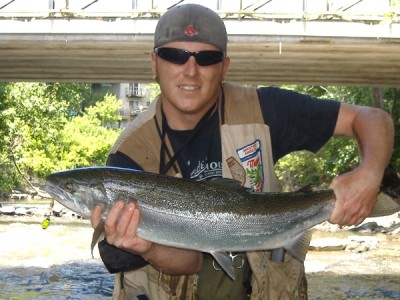 This was a fun catch. I saw this fish swimming around with another fish. The 2 fish were chasing each other. Then they moved into this small little pool. Well I had a friend with me floating shrimp. He took a cast and when he was about to bring his line in one of the fish followed the shrimp in. I told him to hold a sec and let me take a cast at the fish. I said I bet this fish will hit my spinner if he first followed your bait. First cast he nailed the spinner. I saw the fish but could not see him hit. But I set the hook and this fish went nuts. He ran all upstream jumping out of the water. Then he went down the rapids and I finally got him in. Good times!