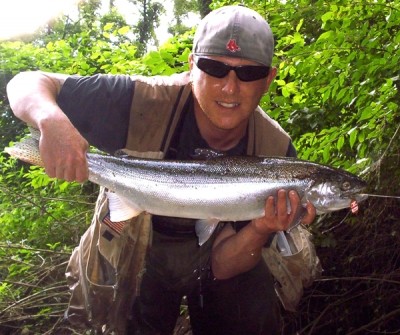 This was an awesome catch today. I was holding the spinner in the current in a small deep pool. On my first cast in this pool I was at the end of my cast about to bring the spinner in for the next cast when I saw this fish come up but miss the spinner. So I kept the spinner in and the fish turned back around and I watched him come up and swallow the spinner. I set the hook hard before he even had a chance to run away with it. I had to keep the fish since it was hooked deep down in it's mouth. But still was a fun Mepps catch watching him bite like that. Good times!