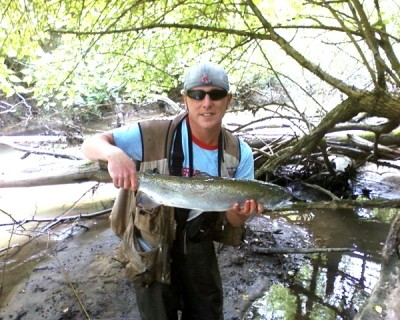 I decided to fish behind a log jam in this little pool behind the big pool I've been fishing. I took a cast under an over hanging tree then I got the spinner into the current and held it there right in front of me. Right as I was about to bring it in a steelhead comes up and tries to hit but missed. So I casted right in front of me. The same fish comes back again but this time takes the spinner. I set the hook before the fish even knew it was me. As soon as I did that this fish went crazy took me right into the log jam. The fish had me wrapped around at least 6 different logs. I tried to get the line out, but he had me wrapped good. So I opened up my bail so my leader would not break and kept trying. Well the fish ended up getting tired from trying to get away. I saw him coming to the top of the water 20 feet downstream from me. So I found my line and decided to pull the fish in by hand. It was not easy because the fish had a little bit of fight left. But I kept pulling him in easy and finally got him in my hands. I decided to keep the fish since it was so wore out. After I got the hook out of the fish, I had to cut off my leader with my spinner on it because i would not of got my spinner back since he had me all over in that log jam. But I got my line out, put my leader back on with my spinner and was ready to catch another. That was the lucky catch of the day. Was great to see the fish slam my Mepps! Good times!