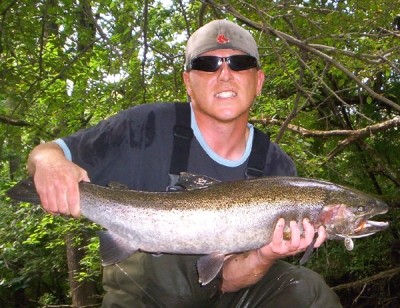 I got this nice buck holding the spinner in the current in a small little pool. I had a feeling I would be in trouble if I was to hook a fish in this hole. This little pool was surrounded by logs. All the way far downstream were tons of little holes with log jams. So I took my first cast and the fish took the spinner light. I got a perfect hookset. Then the fish went right into the first logs. I opened my bail to let him do his thing in the logs. Then I would go in the water and get the line out of the logs. After that I fought the fish a little more. Then he goes into the next set of logs. Well this time I could not get the line out. I was pulling the line lightly to see if he broke off. Well he did not break off. So I pulled the line and he would keep on going downstream wrapping me in every log on the way down. I'd say he had me in 10 different logs at once. The only thing I could do is leave my bail open and get in the water to find my line and follow the line to where the fish was at. Finally after going through all the logs I found my fish all tired out right behind the last log jam. I got my leader and slowly pulled him by hand. He tried one last time to take me in the logs but he was too tired to fight me. So I finally pulled him in by hand. I held his tail cut my leader from my line and brought the fish back upstream fast to take a photo of him where my camera was. I was worried the fish would not survive being out of water for so long. But he took off as soon as I put him back in the water. What a challenge to land this guy. But was worth it thnaks to Mepps! Plus I got my spinner back without him breaking me off. Good times!