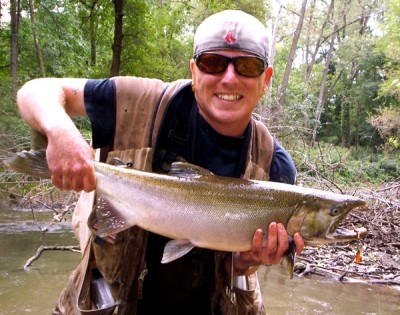 I saw this fish coming up the rapids. So I threw my Mepps in front of the head waves coming upstream. As soon as it hit the water the fish hit super hard. I set the hook hard. The fish did not fight so good at first. I handed my rod over to my friend so I could tail the fish. I tailed the fish but he slipped out of my hands. As soon as that happened the fish took off. My friend was like "here take the rod your fish is not done yet". So I had to fight the fish more. He had my line stuck on a tree but I got it out and finally landed him. It's crazy how coho sometimes act like they are done and then all of a sudden fight hard. This is my favorite coho so far this year because of the lite pink colors on him thanks to Mepps!