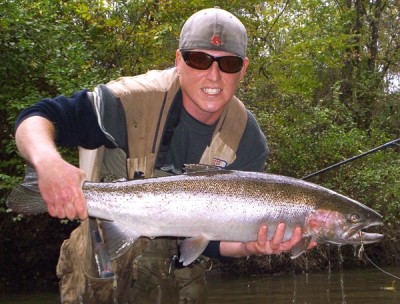 I found some king's and coho's sitting in this little spot in front of a hole in shallow water. I put my Mepps in and they were all trying to hit but they missed. So shortly after most of them spooked. But this fish stayed around and did not move at all. I thought he was a fresh king by the size of him. So I put my Mepps in front of him holding the spinner in the current. Everytime I would do that he would show his teeth but would not move to strike the spinner. I kept trying and the same thing happened. Finally I held the spinner in the current but this time let it fall back slowly to the fish and then he would snap at it. After a few more times the fish finally got mad and nailed the spinner. He hit so hard that he bend my hooks up bad. The fish turned out to be a big steelhead. I could hardly get my hand around his tail. I never weighed him since I let him go. But I'd guess around 15 lbs. What a fun way to catch a fish watching him hit my Mepps like that.