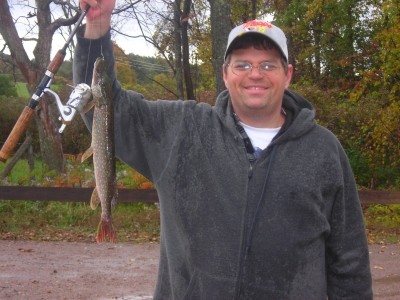 It was a good day of fishing this morning. Caught 3 Pike. The first one was about a 17 inch pike. The second one was a 24 inch pike and the one in this photo is an 18 inch pike. The first one was caught on a gold syclops #3. The other 2 were caught on a #2 Aglia plain silver treble. I have caught so many pike here with #4 silver Aglia Mepps lures but got it snagged the day before so couldn't use it. I had a smaller #2 Aglia and thought maybe they will hit this as well. Mepps are the best lures, before using Mepps I would usually use worms and catch small sunfish only or use other lures and not catch anything all day. My fishing life has definitely changed since I found Mepps. I definitely want to go for my Master Angler Award. Thanks for having such a great program (Mepps Angler & Mepps Expert) and such awesome lures.