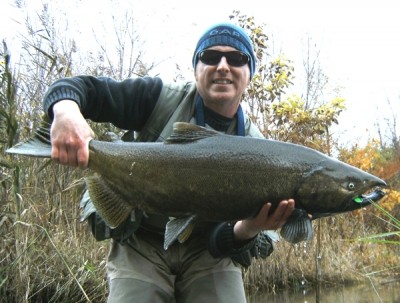 I was out fishing the redds todays. Lately I have not had any luck with spinners because of the current being slow. So I've been doing good with plugs. But we got a ton of rain so the water was perfect to hold the spinner in the current. I found this huge buck surface like as if it was hitting a bug or something. So I took a cast at him. He came up and tried to hit but missed. 2nd cast same thing. 3rd cast I held it in his spot and he came up and swallowed my Mepps. I set the hook hard. Finally got him in. I had a hard time getting the hook out since he inhailed it. But finally I got it out. I never weighed him because I did not want to stress him out anymore than what he already was. So I let him go. I know this fish was over 20lbs. easy. What a fun way to catch a fish by watching him nail a Mepps!