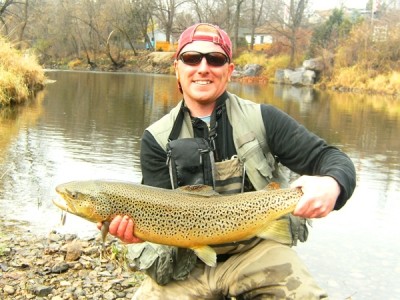 After leaving The Milwaukee River since it was blown out, we decided to try out The Root River. They did not get as much rain. I've never fished this river before. We show up to the first public access. Right away we saw other people catching browns. We took a walk near a bridge. I took about 5 casts in a nice pool. After that I threw my spinner upstream where the pool gets narrow. As soon as I started to reel the spinner in wham fish on. Right away I saw the fish come up and shake it's head. I knew it was a brown. Got her in and took a nice photo. I really like The Root River. I saw lots of browns spawning. I will be coming back soon to fish again. We don't get good numbers of browns in Indiana. They don't stock many and I'm lucky if I can catch a few each season. Wisconsin is awesome for browns. They stock lots of them. I had a great trip thanks to Mepps!

Caught at: The Root River