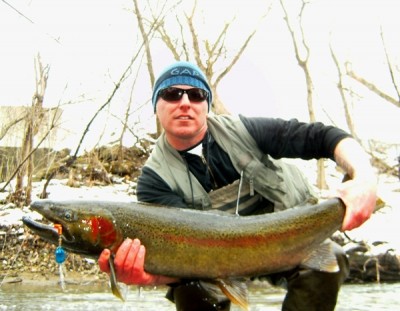 I was messing around getting ready to leave after releasing my first fish. I decided to take a cast with my spinner with the 2 hooks broken off in the fast water. I was down to a single hook. lol Well this fish nails the spinner good. I set the hook totally forgetting I had a single hook. The fish was mad shaking it's head trying to take me down the rapids. Everytime I would pull him out he would freak out and go back in the fast water. Finally I got him in. Once I got him I saw that he was hooked really good. I was lucky he did not get away. Plus he was a really big fish. I broke the last hook getting the spinner out of his mouth. So now I need to put a new hook on this spinner. lol Fun fish to end the day with!