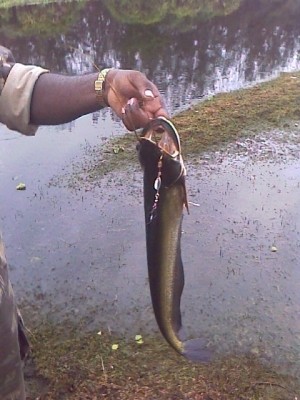 I had purchased a Mepps #1 which was not seeing much use. I decided to cast it out of sheer boredom as I was not getting bites on anything else. The second cast I felt a pull, quickly relinquished. I made another cast and got a bite. After a bit of a tussle the fish ran off. I had my hopes up and kept casting it and tried to vary the retrieve speed.
After a few more cast I had a hit. Fought the blighter for around 2-3 minutes and landed this 2 pound mulley. This is the first fish I landed on a spinner. The fight on roughly a quarter drag was good and I shall shortly be cured of my habit of winching fish out of cover.
Cheers.