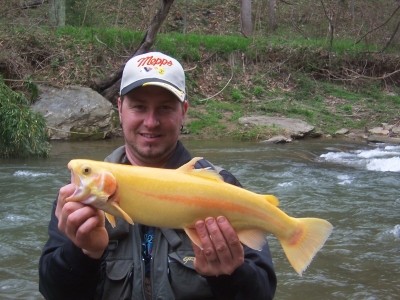 It was the first day of the 2010 trout season. As my dad,and long time fishing buddy Jerry Walthes were just walking out from a good day of fishing already, we decided to stop and fish one last deep hole by this huge rock.My dad had just caught one, now Jerry just caught one,and I just caught another nice brown.I then heard Jerry say holy cow I just had a palomino chase my spinner.So I threw in and as i was bringing my spinner up stream here comes this awesome palomino. Bam, fish on baby I got him and now he is going down stream in some fast moving rapids,thank god for waders.It took about 5 minutes to get him in but the fight was one I will never forget.We took it home weighed and measured him and he came out to be an awesome 3 pound 21 inch beauty that will be on my wall forever.Thank you Mepps there is no other lure in the world better then the Aglia plain #2 gold spinner.