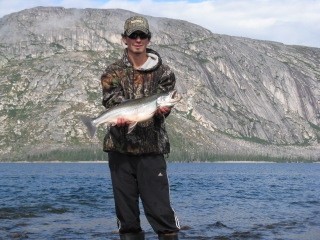 Some friends and I used our float planes to fly to beautiful Northern Labrador Canada to fish Arctic Char. This time of year is normally good for Char fishing, but due to warm waters the Char were late entering the fresh water lakes. This proved very difficult to get them to take our flies and spoons. They were still very bloated from the ocean. Luckily a friend was told to bring "a bunch" of #3 silver Aglias. Good thing he did because the Char ate them up every cast. Here is a picture of one of hundreds the four of us landed in the three days we spent there.