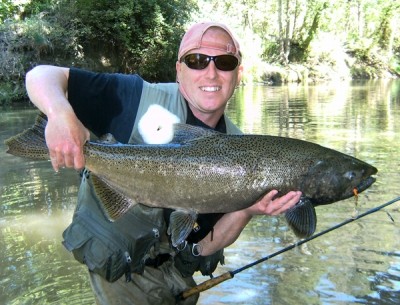 I saw this fish surface many times upstream from where I was fishing. He kept jumping. So I got sick of seeing him jump. So I moved upstream and started casting near where he was jumping. After a good few casts. This fish finally hit my spinner. This big buck hit soft. Almost felt like the bottom. But I knew it was him. I set the hook and the battle was on. This fish put up a great fight. He ran me all the way upstream far into some logs. I had to run up and lift the logs out of the way to get my line out. At first I thought he might have broke off. Right when I got near the last log that he was under the fish saw me and took off so I knew I still had him hooked. I got the line out and now this fish was running back downstream. I had to cross over the creek to the other side in order to land him. I fell in a deep pool while crossing the creek. But I got out and made it to the other side and finally landed this fish. What a fun Mepps catch even though I went through a lot of trouble to get him in. Good times!