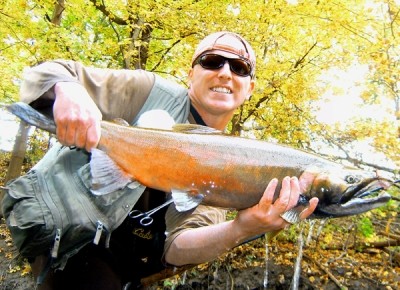 I was fishing for a pair of spawning kings. The buck king showed interest in my Mepps but then spooked off the redd. Shortly after this big coho came upstream and decided to sit next to the spawning hen king. This coho then started to try to spawn with the hen king. It was crazy seeing this coho do that. So I took a cast at the coho but he would not bite. By the 3rd cast he showed interest. 4th cast he nailed my Mepps. I decided to weight the fish before letting him go. He weighed 10.3 lbs. Fun Mepps catch!