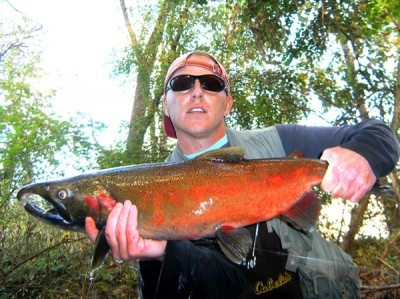 I came up on 4 spawning coho's. I took at cast at 2 of them in the faster water. But they spooked right away. The other 2 coho's were sitting is the slow water in between some branches. I could not get to them so I decided to jigg my Mepps. I was jigging in front of the hen and the big buck was getting mad. He took a good snap at my Mepps. I did the same thing and he tried to hit again. This time I put my Mepps in between and behind the 2 fish and jigged the spinner slowly upstream putting it in front of the big buck. Once the spinner was 1 foot away from the buck he came up and swallowed my spinner. This fish was so aggressive that he would of probally hit anything that was in his path. I was barely jigging my Mepps when he hit it. Good times!