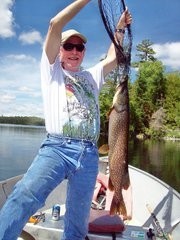 My first time to Canada. Fly-in, about a 45 minute fly out from Rusty Meyers, Fort Frances. I had a #3 dressed Aglia. I had a bunch of lures, but I had the Mepps because of experience on Michigan Lakes. Well I tried everything for the first 2 days, and switched to the #3 Aglia becuase it cast so well to the rocky drop-offs. Casted into a rock face and saw the northern come out the depths to the lure- still get goose bumps thinking back- it hit and the fight was on. Never had caught a big Northern so I fumbled through the play and the netting (now use a lock jaw fishing tool), and I was numbed by the thrill. "Big Louie" was shown off (6 of us in camp with a a young lad who was amazed). We prepared Big Louie by slicing him into chunks and marinating him over night- grilled as a shishkabob- hit of the camp grill!

Back many times to that lake and ince I have learned to start with Mepps, stay with Mepps and end with Mepps. I outfish everyone casting and trolling.

Thanks Mepps- as long as I keep going to Canada you will have a little blurp in sales around the 3rd week of July every year!