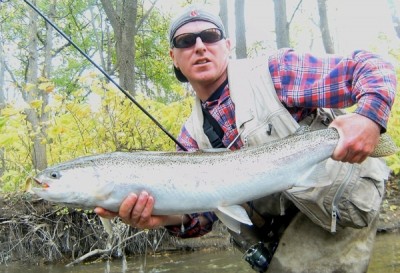 I was waiting for some coho's to come back to a redd. But then this steelhead shows up and sits on the redd instead of the coho's. I had my fly rod and was trying to get it to hit off the surface. I noticed the Steelhead tried to follow my surface fly but it never hit it. So I gave up on the flies and put on my Mepps. First cast it tries to bite. After that nothing. So I started jigging the spinner and this steelhead finally hits my Mepps good. It ran upstream and gave me one nice jump before I got it in!