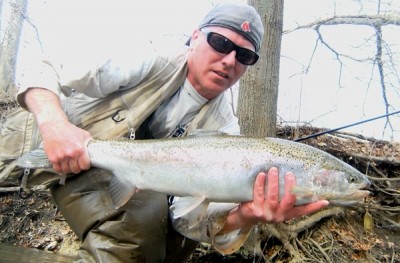 I just got done landing a steelhead on a Mepps and I was looking downstream and saw a wake heading upstream. The fish jumps a log jam and rests right where I landed my fish before. I took a cast and the fish showed a bit of interest but was getting spooked and started to move upstream. I took few more casts but nothing. As she was going upstream I decided to jig the spinner. Right when I did that, she nailed my Mepps! I had to pull her out of the logs but finally landed her.